There's a berried treasure at the bottom of this creamy concoction. You'll not find a fresher finale to a summertime meal. —Debbie, Oregon

Results may vary from person to person. 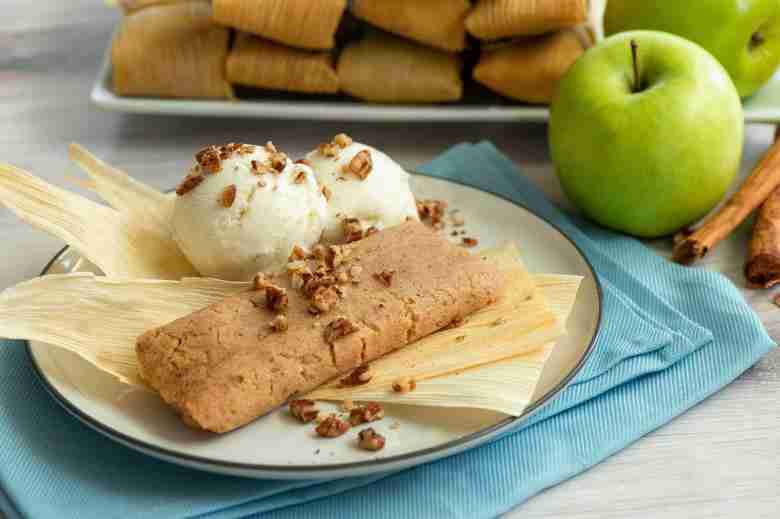 Tamales are traditionally served in Latin households year-round, but grow increasingly popular during the fall and winter months for the holidays. From spicy and savory to rich and sweet, tamales come in all flavors. These Cinnamon Apple Tamales have a similar filling to an apple pie, but instead of a flaky crust, these tasty treats are enveloped in a sweet-cinnamon corn flour base dough. Serve them with a drizzle of caramel or a la mode with a sprinkle of chopped pecans.

2. Place shortening in bowl of a stand mixer and beat on medium speed until creamy and fluffy; about 3 minutes.

3. Add milks, water, 1 tablespoon of cinnamon, nutmeg, and corn flour. Continue mixing at medium speed, pausing a few times to scrape sides of bowl with a spatula; about 10 minutes.

5. Drain corn husks and pat dry.  Hold corn husk with pointy side towards you.  Scoop 1/4 cup of masa mixture on corn husk and spread with a spoon; leaving a 1-inch border on all sides.

7. Fold one side of the corn husk over filling, then fold the other side, overlapping. Fold the pointed side up and turn over to keep it from unfolding. Repeat with remaining husks and masa.

8. Arrange tamales upright in a steamer. Fill with hot water right below rack and cook over medium-high heat.

9. Cover top of tamales with a layer of remaining husks and a damp towel; cover with lid, bring to a boil and reduce heat to medium, adding hot water as needed. Steam for 90 minutes or until when tested, corn husks peel off and masa separates easily form husk.

See what pure organic ingredients can do for your skin.