Why Are Seniors Turning To CBD?

This plant’s main claim to fame–'big brother pant'–may be getting a run for its money by the recent popularity of CBD, also found within the same plant. Unlike the 'big brother plant', CBD won’t get you high–unless you were lucky enough to have invested in one of the many CBD-related stocks that continually produce “big profits” for its investors.

So what exactly does it do? CBD, which is a whole plant oil, has been the focal point of studies surrounding everything from anxiety to pet medication, and it can now even be found at the local deli or gas station.

While 'big brother plant' may be considered a younger man’s game, those aged 54 and older have shown an interest in CBD along with many others. We studied over 1,000 seniors, all of who were at least 54 years old, by asking them questions about their CBD usage and the associated benefits and side effects. Read on to hear what these established men and women had to say. 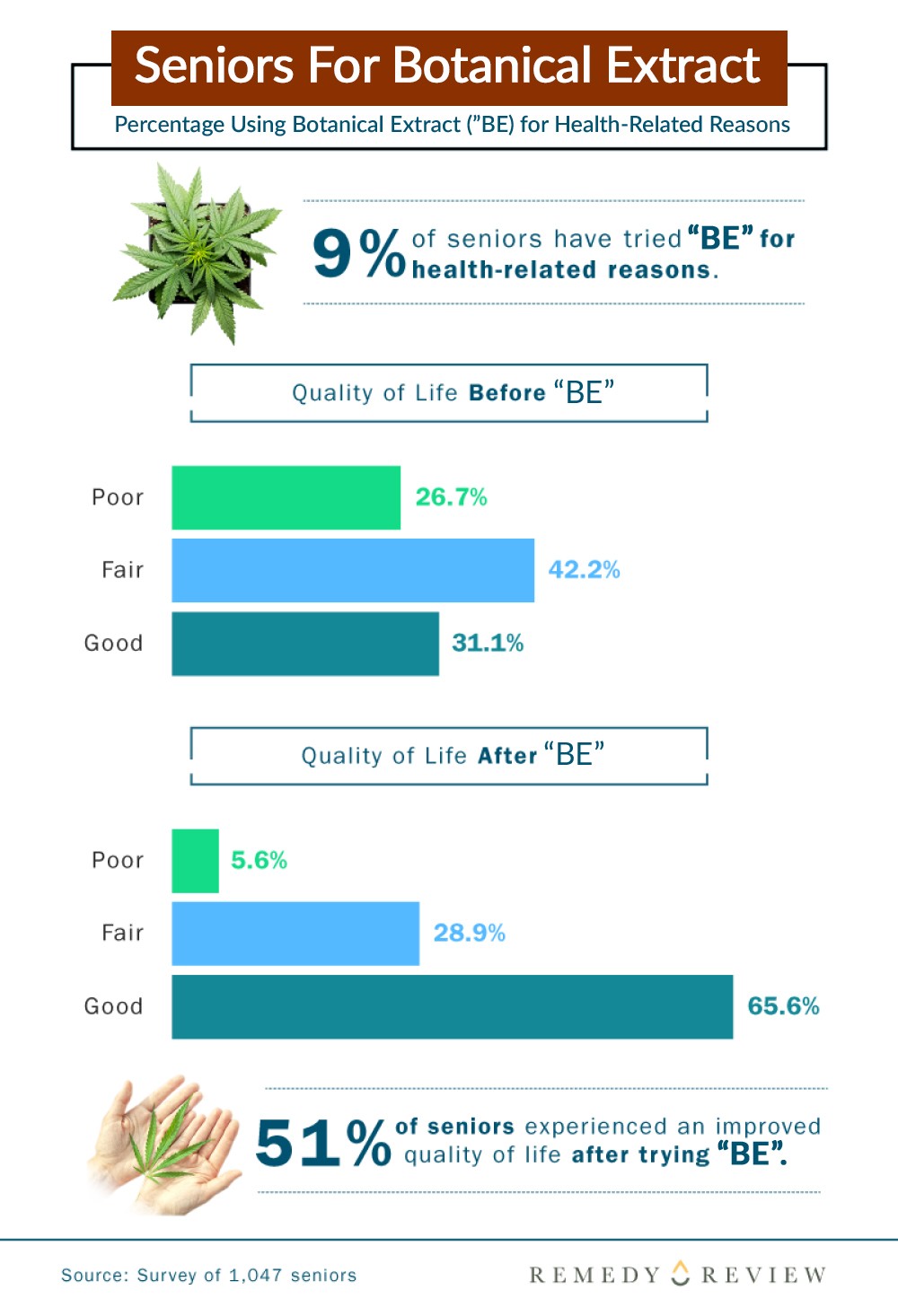 Not So Stuck in Their Ways

Perhaps the all natural associations with such a long list of benefits and uses simply sounds too good to be true to the 91 percent of seniors who chose to stay away from CBD. Or maybe doubt creeps in because of CBD's association with the chemical that creates a chemical high in the brain. Doubt aside, the reward of trying CBD clearly outweighed the risk in the minds of many aged 54 and over, considering the seniors who did try CBD experienced a dramatic improvement to their quality of life. 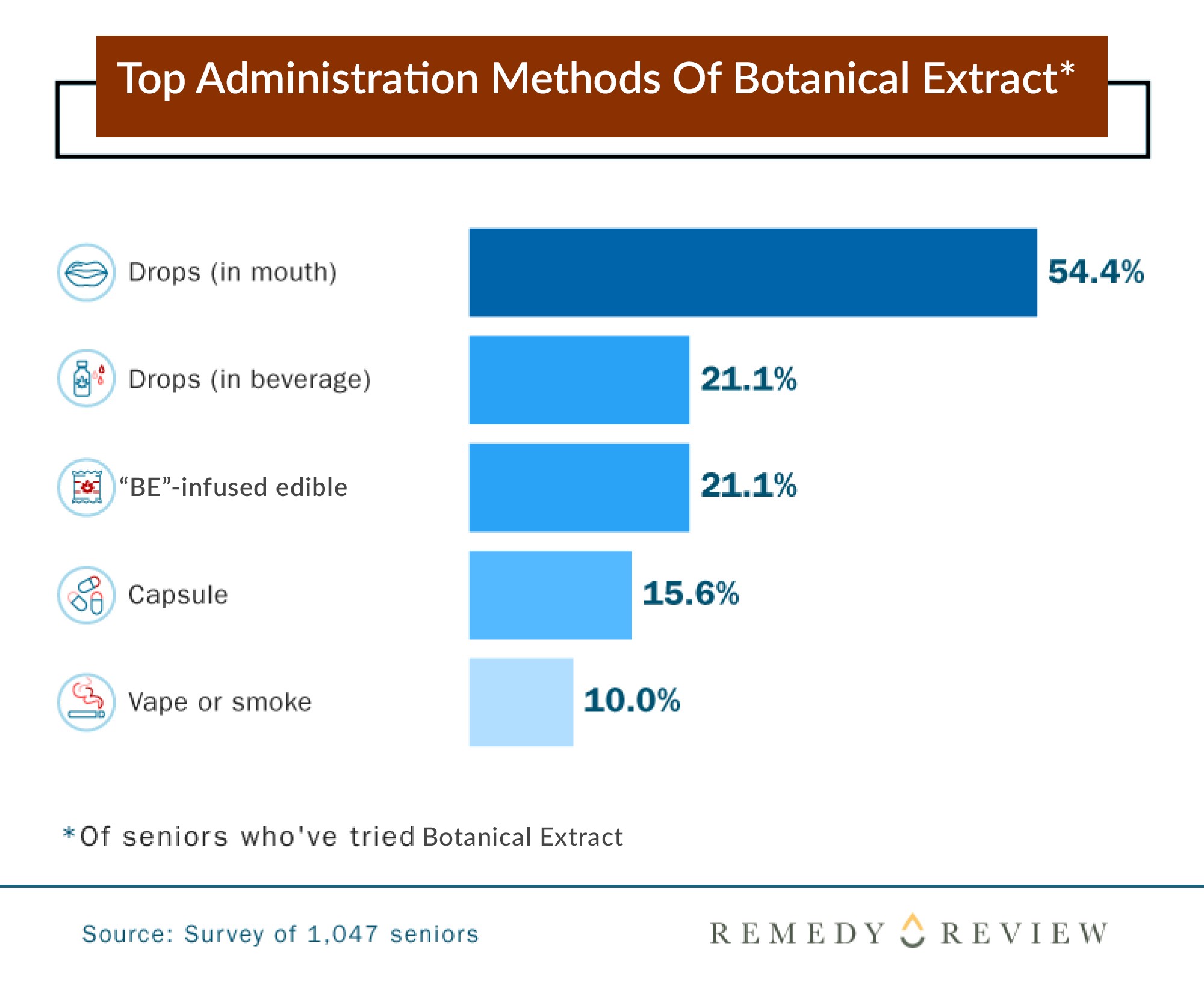 Ingesting the chemical in everything from beverages to pills, the senior community exhibited openness to a variety of products and methods for CBD consumption. Perhaps the most intuitive form of using CBD would be the application of it directly inside the mouth, which was also the most common choice among our surveyed seniors. Fifty-four percent did so, followed by 21.1 percent that chose to eat CBD-infused edibles and add oil drops  to their beverages. The least popular ingestion method was through smoke or vapor, only occurring 10 percent of the time among our senior CBD users. 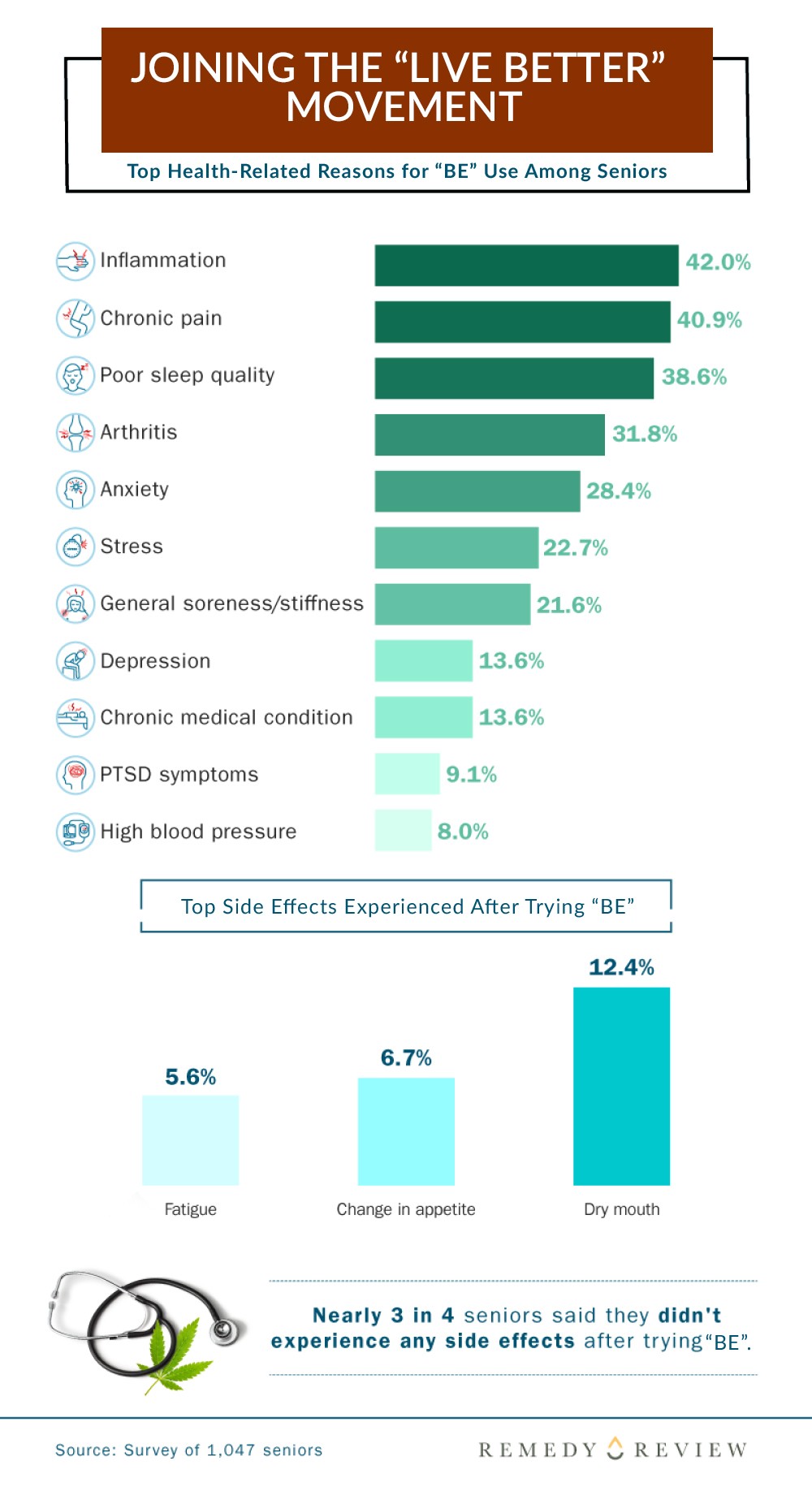 Anxiety and stress were cited as the fifth and sixth most common symptoms, respectively, that seniors attempted to alleviate via Botanical Extract. The Anxiety and Depression Association of America estimates that nearly 18.1 percent of the U.S. population over the age of 18 suffers from an anxiety disorder, and only 36.9 percent of those suffering choose to get treatment. It’s encouraging, then, that some seniors are attempting to self-heal with this type of nontraditional “treatment.” Even more encouraging is that so few experienced side effects, the most common of which was dry mouth (reported by 12.4 percent of users), a condition not considered life-threatening. 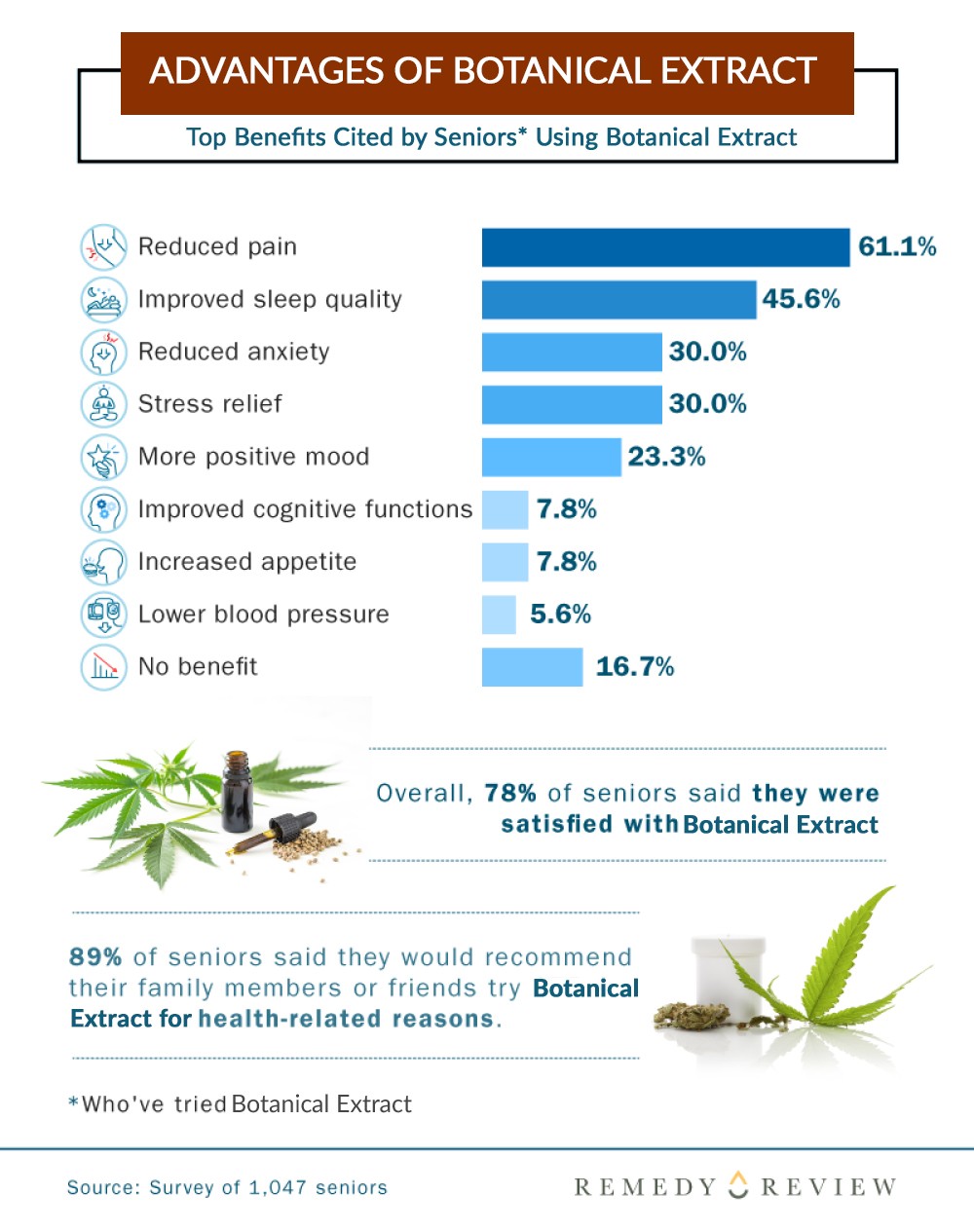 Interestingly, Botanical Extract shares at least one similar response as it's "Big Brother" an increased appetite. It is said to promote the release of hunger-stimulating hormones in the brain, causing what’s known as “the munchies.” For 7.8 percent of seniors, Botanical Extract created a similarly increased desire for food.

The data behind this study strongly support the consideration of Botanical Extract as an alternative healing tool. Seventy-eight percent of seniors said they were satisfied with the product, and 89 percent said they would recommend Botanical Extract for health-related purposes to a family member or friend.

Over or Behind the Counter? 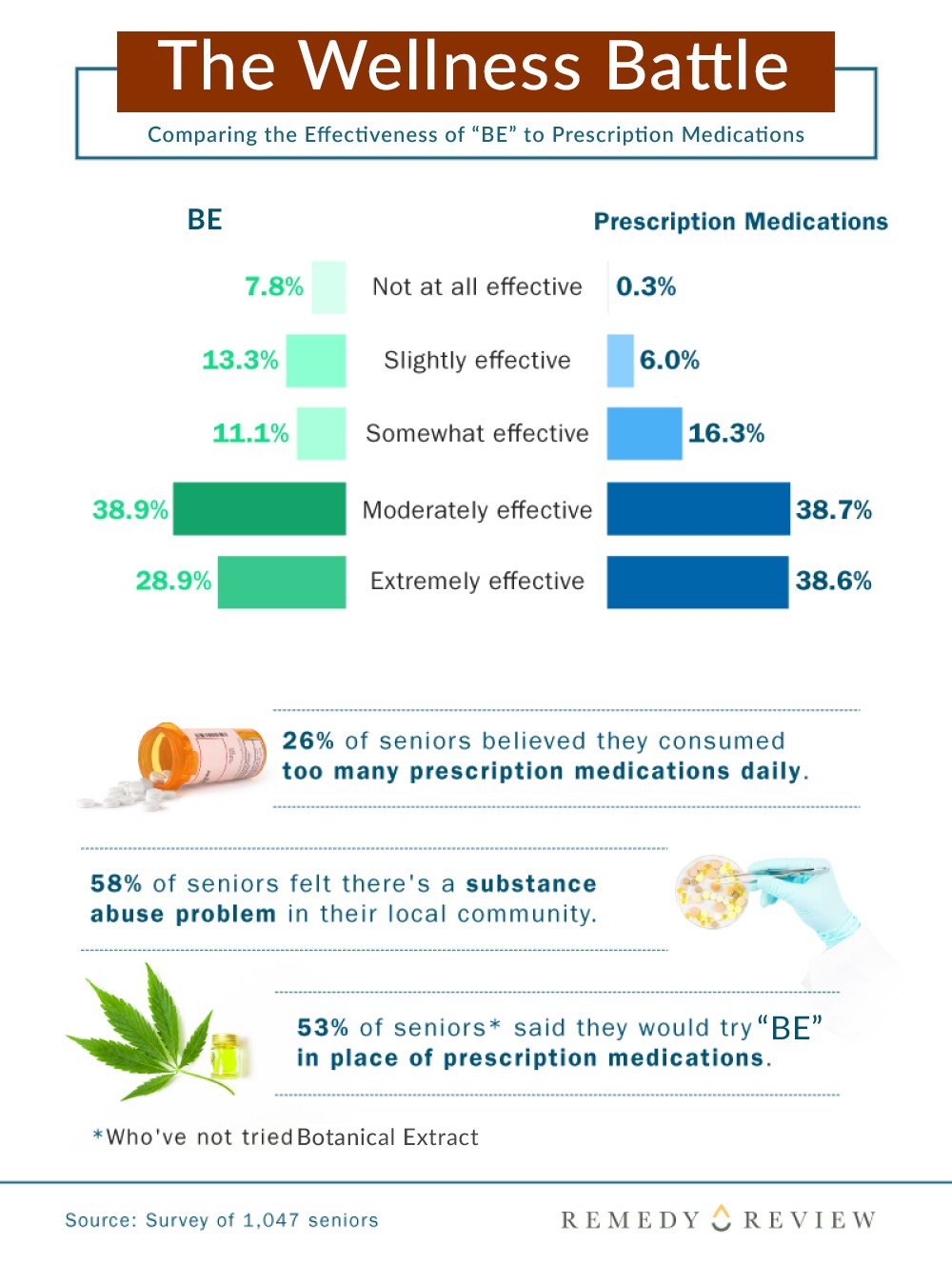 Of course, natural remedies have numerous prescription counterparts. Instead of Botnical Extract lotions, chronic pain is often treated with Percocet and Vicodin, while stress and anxiety are often met with prescriptions for Valium or Xanax. The decision (and often debate) between over-the-counter and natural medications, however, has garnered much stamina and division in recent years. Natural remedies and practices like yoga, meditation, and the use of chiropractors all increased in 2018 paralleled by the growth of the prescription painkiller epidemic.

According to 58 percent of seniors, there is a substance abuse problem in their local community. Moreover, 26 percent think they personally consume too many prescription drugs daily. As for alternative ideas? Fifty-three percent of the seniors who had not tried Botanical Extract mentioned they would like to try this natural alternative to doctor-recommended prescription medications.

The Next Budding Market …

While getting older once conjured images of weekly pillboxes full of prescription medications, 2019’s increasing holistic market for medical treatments may be changing this vision. Thanks to Botanical Extract (BE), many seniors can now find solace and respite in the face of everything from poor blood pressure to subpar sleep quality.

Of course, the interest in Botanical Extract extends well beyond the senior demographic. The chemical’s meteoric rise in today’s marketplace would only have been possible with the interest and patronage of several generations. Symptoms like chronic pain can be remedy motivators for seniors, while stress and anxiety remedies attract many modern health gurus looking for alternatives to prescription medications.

As the dangers of prescription medications, particularly opioids, continue to stack up, Botanical Extract may look more and more appealing.

We collected responses from 1,047 seniors by administering online surveys through Prolific.ac. For this analysis, we have defined seniors as adults aged 54 and older. Respondents who were younger than the designated age were excluded from our findings. To ensure data accuracy, participants who failed an attention-check question or entered inconsistent data were excluded.

The main limitation of this study is that different sources have varied definitions for the age ranges that qualify as “seniors.” Additionally, all benefits and side effects are based on self-reporting. Self-reported data are subject, but not limited, to selective memory, exaggeration, or telescoping. These findings have not been reviewed or approved by medical experts and should not be used as a substitute for seeking out and listening to a primary care physician.


The findings shown in this study are not medical advice and should not be used as a substitute for seeking out primary care providers. This study is based on anecdotal evidence and relies on self-reported data.

Are any of the seniors in your life suffering in a way that Botanical Extract could potentially help? You’re more than welcome to share the results of this study with them, or anybody else for that matter, for noncommercial purposes. Just be sure to link back to this page and its authors so that they can receive proper credit for their work.